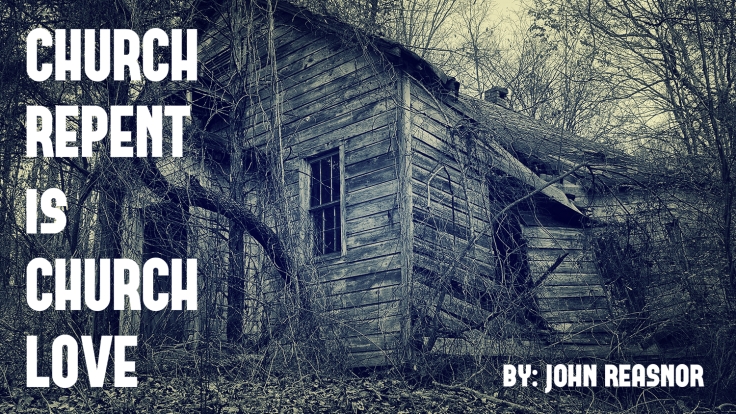 One of the five tenets of Abolitionism is “The Obligation of the Church”. There are two sides of the “Obligation of the Church” coin. One side is the obvious one that is often discussed. The Church is obligated to fight injustice. The Church is to “abhor that which is evil; cleave to that which is good” (Rom. 12:9), expose evil (Eph. 5:11), and destroy the ungodly thinking that defends evil (2 Cor. 10:5). We are exhorted to rescue the weak from death (Psalm 82:4), snatch the falling from flames (Jude 1:23), and hold back the stumbling from the slaughter (Proverbs 24:11). Indeed, we are to teach all the world what Jesus Christ has commanded (Matthew 28:20).

Now, are the churches largely guilty of not doing these things? Of course they are.

Note that I am not only talking about liberal apostate churches or health wealth prosperity preaching. I am talking about Bible believing, conservative, orthodox churches. Even a cursory look at modern evangelicalism shows not only the deep and widespread apathy of the churches, but also the guilt of the churches. Not only are most local churches neglecting the weightier matters of the law (justice, mercy, and faithfulness), but they are oftentimes opposing and discouraging those seeking justice, mercy, and faithfulness. Not only are the churches apathetic and opposing vital Christianity, the sad truth is that our congregations are filled with men addicted to pornography, leaders addicted to power and money, and women using abortifacient birth control methods. With their mouths they condemn evil, but because of their hypocrisy, they oppose those that are not only confessing with their lips, but acting against evil. That is the current situation. These are not new or novel observations. There is much complacency, apathy, and sin in our churches.

The other side of the coin is that the Church, through local churches, is God’s sovereignly ordained means of bringing revival to the world. The role of the Church in bringing about revival and social change is not an optional or peripheral thing. It is of utmost importance. God can and has worked through lone faithful, but it is not his revealed desire for that to be an encouraged or preferred method. It certainly should not be viewed as normative. God desires for Christians to be in community with one another, not just sitting in a building once a week with one another, but knowing, serving, loving, teaching, correcting, rebuking, encouraging, and sharpening each other. When we gather for the teaching of the Word of God and for the sacraments, that gathering may look and function different from one local expression of Christ’s Body to the next. And although we may righteously and diligently strive with one another in order to better understand what is most wise and most biblical in how our gatherings look, we do so as brothers and sisters in Christ and with much grace and charity. How Christ’s Bride functions on a local level is not to be taken lightly if we care at all about obedience or the world we are seeking to love.

Given that the Church is obligated to function in the culture in such a manner that is pleasing to God (justice, mercy, faithfulness, ect.), the churches have largely failed to be faithful in this, and the Church is God’s normative means of bringing about cultural transformation, calling the Church to repent of not acting on the weightier matters of the Law should not be a surprising or radical thing to do. However, some have taken issue with this.

There has been more than a few accusations made about our appeals to the Church. First, it is said that because we are calling the Church to repent then we must be abandoning the Church. This is patently false. In order for a Christian to rebuke another Christian, must the first Christian be abandoning the Faith? Of course not. Although I can not speak for every self proclaimed abolitionist around the world, I can say that we have never encouraged or endorsed separating oneself from the Bride of Christ. Moreover, as I have stated above, that would be antithetical to our ideals on the nature and importance of the Church.

An even more striking misrepresentation is the claim that calling the Church or even specific churches to repent is somehow “hating”, “attacking”, or “abusing” the Bride of Christ. This is an absurd and hypocritical claim. Oddly enough, this misrepresentation occasionally comes from good men that love their neighbor as themself and do much for the Kingdom. In fact, some of these same men minister at abortion mills and participate in one-on-one evangelism and street preaching. They often and regularly call abortion minded women, atheists, and Mormons to repentance. They call our nation to repent, and they even acknowledge many of the shortfalls of The Church. But when Christians call the Church to repent, it is somehow “attacking” or “hating” the Church. Are evangelists “attacking” Mormons when their false religion is exposed? Are apologists “hating” atheists when the absurdity of their worldview is made clear? Is a Christian “abusing” his brother when he calls him to repent of his sins? Of course not. As reasonable Christians, we know that it is loving to call those in sin to repent, for “Better is open rebuke than hidden love” (Prov 27:5). Of course, we also know that sin does not give a blank check to the rebuker, for we must strive to ensure that no logs are in our own eye. However, we are to remove the log so that the speck may be removed from our brother’s eye (Matt 7:5), not so that we can be content with our own clear vision.

With that said, claims that calling The Church to repent is “attacking” the Bride of Christ are clearly absurd and hypocritical. It seems one may point out the flaws of The Church but to then strive to correct these flaws is not only frowned upon but vilified. Perhaps this confusion is brought about because it is an uncomfortable thing calling those closest to us to repent? Perhaps it is because we do not truly act as if the Church is in sin, but only marginally flawed in a somehow unsinful or unimportant way? Perhaps the kneejerk reaction to vilify calls of repentance is because we value the continued repute of local church institutions over the purity of the Church Universal. It is my belief that it is most often a mix of the three.